Of the approximately 460 species of Anopheline mosquitoes known, over 100 can transmit the plasmodia which cause malaria. However, only 30–40 species commonly transmit malaria to humans. Malaria, transmitted by Anopheline mosquitoes, is responsible globally for the deaths of around 1 million people each year. Some species of Anopheles can also act as the vectors of the filariasis causing parasites, Wucheria bancrofti and Brugia malayi. They are also implicated in the transmission of some arboviruses including West Nile Virus, Japanese Encephelitis, O`nyong`nyong and Chikungunya.
Anophelines are found almost globally, but generally do not act as vectors of disease in temperate climates. Adult females lay 50–200 small eggs (about 0.5 × 0.2 mm) per oviposition. Unlike other mosquito species eggs are laid singly and directly on water and are unique in having floats on their sides. They are not resistant to desiccation and hatch within 2–3 days, although hatching may take up to 2–3 weeks in cooler climates. The larvae breathe air through spiracles so must come to the surface frequently and spend most of their time feeding on algae, bacteria and other microorganisms in the surface microlayer. Larvae develop through four stages, or instars, after which they metamorphose into pupae. As with the larvae, pupae must come to the surface frequently to breathe, which they do through a pair of respiratory trumpets. The pupal stage does not feed and after 2-3 days, the dorsal surface splits and an adult mosquito emerges. Anopheles adult mosquitoes feed on nectar and other sources of sugar but females require a blood meal before they can develop eggs. After obtaining a full blood meal, the female will rest for a few days while they digest the blood and their eggs develop. Once the eggs are fully developed, the female will lay them and seeks another meal of blood. This cycle repeats itself until the female dies, normally within a few weeks depending on temperature, humidity, and their ability to successfully find a blood meal. 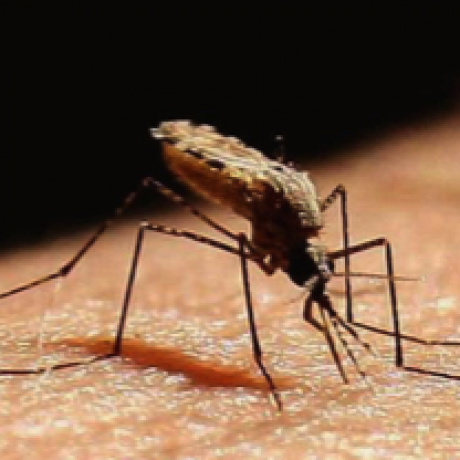