Adults are up to 3 mm in length. The body colour is determined partly genetically, and partly by the environment (especially food quality). Most clones tend to be yellowish to dark green or brown, or sometimes orange-pink. The species spends its entire year on cereals and grasses. Only a small proportion of the population overwinters as eggs on Gramineae, and these hatch in early spring. The majority of the population overwinters as mobile stages on wild grasses or winter cereals and can develop rapidly in warm springs. Colonies of wingless aphids develop on the flag and upper leaves of cereals, then move to emerging ears, especially on wheat. The high reproductive potential of aphids under favourable conditions means that outbreaks can cause considerable damage, especially in wheat. Virus transmission is a threat even at low population densities. S. avenae is widespread in the different climatic regions of the world, except the subtropics and tropics. 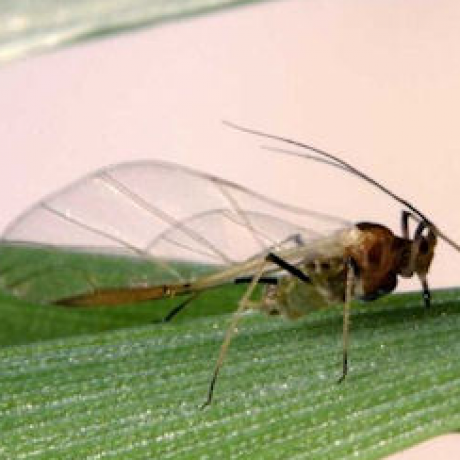