Like all aphids, R. padi uses its piercing-sucking mouthparts to penetrate plant tissues in order to reach a vascular bundle and ingest phloem sap. Although this species can remove considerable amounts of liquid and nutrients, and strong infestations can sometimes lead to contortion of leaves, the direct effect on grain yield is generally only slight, especially if plants are young at the time of infestation. The insect causes most damage by transmitting a number of viruses, especially Barley Yellow Dwarf Virus (BYDV), for which it is the most important vector.
Infection with BYDV causes barley and wheat to turn yellow, whereas oats becomes reddish in color. Affected plants are generally severely stunted and non-productive. The resulting losses in grain yield and quality can be considerable. Phloem sap only contains small amounts of the amino acids the aphids need, so they must consume large volumes of it, meaning that they subsequently have to excrete excess liquids and sugars. If population densities are high, this excretion (called „honeydew“) can create a sticky film on plant surfaces that can reduce photosynthesis and promote the growth of sooty mold.

The life cycle of this species is typical for aphids. The Birdcherry-oat aphid often reproduces exclusively by parthenogenesis from spring to late summer. All individuals are females, and they give birth to live young, which are also female. Most of them remain wingless. When conditions worsen (e.g. due to the exhaustion of the food source, falling temperatures or crowding), winged forms appear and start to colonize other plants. In warm weather, the generation cycle can be completed in about a week; each female is able to produce 60-80 larvae during its reproductive period of 3-4 weeks. Accordingly, population growth can be very rapid. In climates with mild winters, parthenogenesis remains the only mode of reproduction throughout the year.
In colder regions, however, sexual forms appear in the autumn, which then migrate to the primary (winter) host (e.g. the bird-cherry), mate, and produce eggs, which are laid near the buds. The overwintering eggs are very frost-resistant. In the spring, female founders (so-called fundatrices) hatch and start to produce offspring. After several generations (usually three) on winter hosts, migration to the summer host starts. The summer (secondary) hosts are grasses, including most cereal crops. The birdcherry-oat aphid is found almost worldwide (except the subtropical and tropical regions). 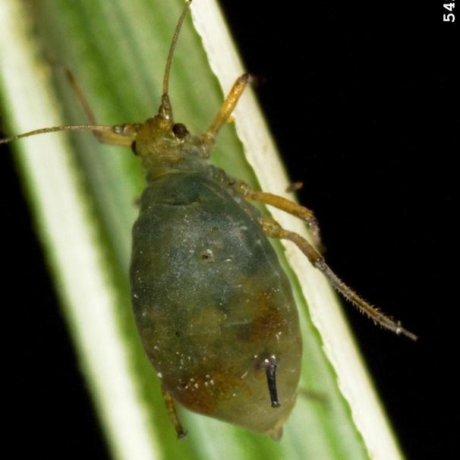