The lettuce aphid is a major pest of lettuces (Lactuca sativa L.) and Ribes spp. in Europe where it originates. In recent years this insect has spread to other continents (North and South America, Asia and Australia), where eventually causes major problems for growers. In general the direct damage is limited on lettuces, leaf curl and sometimes stunting of plants. On lettuce and other salad crops, leaf curl, stunting and sometimes dead hearts. Honeydew production, and subsequent sooty mould growth, contributes to cosmetic damage. The aphid is a vector of gooseberry veinbanding disease, cauliflower and cucumber mosaic virus (Blackman & Eastop 2000).

During summer N. ribisnigri reproduces asexually on lettuce and related species. In autumn, males mate with females who lay overwintering cold-resistant eggs on the primary hosts (Ribes spp.). In the spring the eggs hatch and nymphs colonise shoots of the winter host before migrating to lettuce once again.

The lettuce aphid is hard to control on lettuce crops because it lives deep inside lettuce hearts where few insecticides can penetrate. In addition to this protection the aphid developped resistance to several insecticides. Because of the likely resistance breeding efforts are ongoing to develop aphid resistant varieties of lettuce.

In Europe, lettuce aphid has shown varying levels of resistance to organophosphates, carbamates and synthetic pyrethroids (Barber et al. 1999). Resistance to pirimicarb was shown to be mainly due to a decreased sensitivity of the target acetylcholinesterase; this modification conferred also, resistance to propoxur but not to methomyl and the two tested organophosphates (acephate and paraoxon). Endosulfan resistance was associated with a moderate level of resistance to dieldrin, and resistance to both insecticides was due, in part, to increased detoxification by glutathione S-transferases (GST) 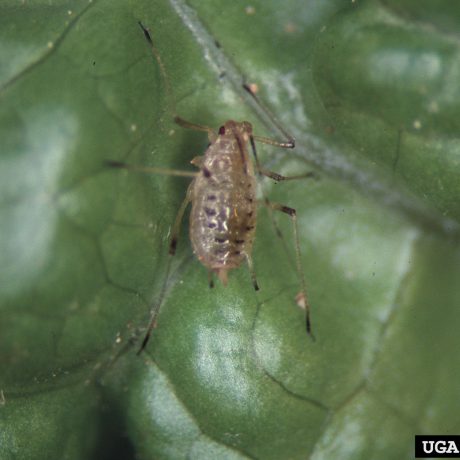