Tsetse flies are robust flies ranging from 6 to 15mm in length with a passing resemblance to house flies. There are 23 species belonging to the genus Glossina, all found only in Africa south of the Sahara. They can be distinguished from other flies by looking at their wings, which lay completely over each other at rest, and have a characteristic shaped pattern of wing venation, with a “cell” in the centre of their wings in the shape of a hatchet or meat cleaver. All tsetse fly are brown in colour and their palps, part of their mouth parts, always point forward, even when feeding, giving the impression of a long “snout”.

Both female and male tsetse fly feed exclusively on blood. After mating the female stores the sperm which she uses to fertilize a single egg at a time. The fertilized egg hatches within the uterus, where the larva remains, feeding from a special gland. The female carries the larva until it is fully grown, at which point the female “lays” the larva in the soil where it immediately burrows before completing its final moult and pupating. After 2 – 3 weeks the adult fly emerges. During her life, a female will lay only 6 – 12 larvae.

Tsetse flies are of public health importance as vectors of African trypanosomiasis or sleeping sickness. The parasitic protozoan trypanosomes can also infect wild game and cattle, where they cause the disease called “nagana”. Four species of tsetse fly are important vectors of sleeping sickness, G. palpalis, G. tachinoides, G. morsitans and G. swynnertoni.

Tsetse flies can be managed to some extent by removing the low brush, that the flies rest on, from around affected villages. Insecticidal traps and lures, based on dark blue or black insecticide treated surfaces that are attractive to the flies, are effective. Sterile male release programmes have also been successful, but are very resource intensive. 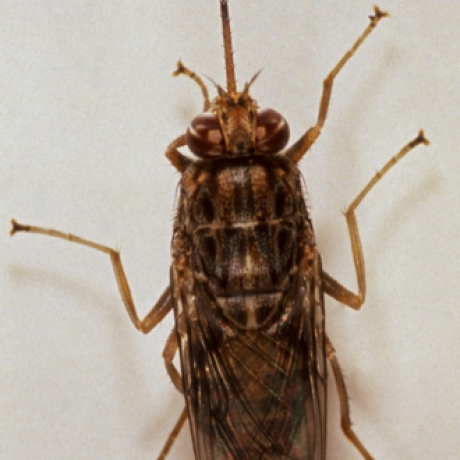