The red flour beetle (Tribolium castaneum) is an important pest of stored grains and agricultural produce world wide. Originating in the Asia-Pacific region, global food transportation has held re-distribute this pest globally, ensuring its place as one of the most important pest species of stored produce. Both the adult beetle and its larvae feed on stored legumes, nuts, cereals and other grains. Female beetles can lay up t0 400 eggs and live for approximately 6 to 8 months.

The red flour beetle has developed resistance to many of the control methods that have been used for its control and as a result of the global transport of stored produce, resistant populations have been able to establish in almost all parts of the globe. Resistance to organophosphates, carbamates, cyclodienes, pyrethroids, DDT and fumigants have been recorded in North and South America, Europe, Africa and the Asia-Pacific region, making control of this pest difficult

Resistance to organophosphate insecticides has been reported in most of the regions of the world. Resistance is based on enhanced metabolism by carboxylesterase enzymes. The differences in carboxylesterases specificity means that cross resistance amongst the acetylcholinesterase inhibitors (organophosphates and carbamates) is variable depending on the up regulated enzyme. Resistance to cyclodiene insecticides has also been well documented globally. Here resistance is associated with a target site mutation in the GABA-gated chloride channel. This A302S mutation is often called RdL resistance. Resistance to pyrethroid insecticides, DDT and phosphine fumigants have all been recorded in various populations of the red flour beetle, reducing the number of effective control solutions available to grain store managers. Although resistance to insecticides has been reported extensively in many locations around the world, not all populations of beetles are resistant and it is recommended to consult with local experts to determine the best control solution for these pests. 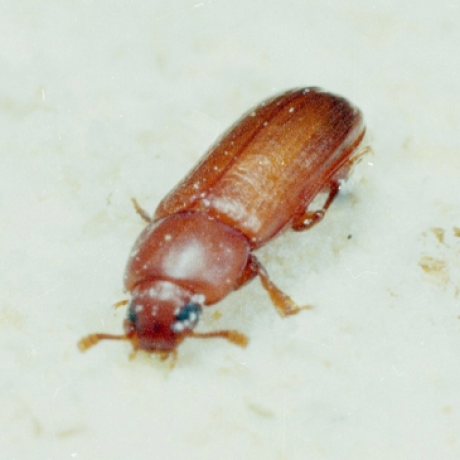