Several species of this bug are responsible for the transmission of Chagas disease which is a potentially life-threatening illness caused by the protozoan parasite, Trypanosoma cruzi (T. cruzi). It is found mainly in endemic areas of 21 Latin American countries, where it is mostly vector-borne transmitted to humans by contact with faeces of triatomine bugs, known as ‘kissing bugs’, among other names, depending on the geographical area. Currently 4- 4.5 million people are estimated to be infected worldwide, mostly in Latin America where Chagas disease is endemic (ECLAT data). The disease is curable if treatment is initiated soon after infection.

The adults lay ovoid eggs which can be white to a pink colour and these hatch into first instar nymphs. There are 5 nymphal stages and at each stage a minimum of one blood meal is taken, it depends if the nymph is able to feed fully without being disturbed otherwise it may require extra feeds before it can moult into the next nymphal stage. They finally emerge as distinctive males or females. Each female can lay between 100 – 600 eggs during her adult life of 3 – 12 months.

Smaller species such as R. prolixus can complete egg to adult development in 3-4 months but larger bugs such as T.dimidiata and P.megistus can take 1-2 years. T. infestans one of the most important species can complete its life cycle in 6 months in warmer zones but will take a year in more northern cooler zones. Bugs can survive starvation for several months. 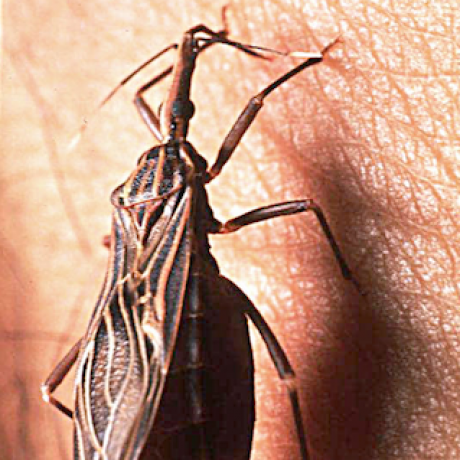