S. litura is an important insect pest of cotton. It causes heavy damage to cotton and lowers production. The adult is a dark brown moth with white lines on its wings. However, it is the worm-like young (larvae) that cause the damage. The larva is the size of your small finger and has bright yellow lines on the back and sides of the body. On touching, the larva curls at once and drops. Eggs are laid on the underside of leaves. To begin with, the eggs are greenish and turn black later on. The larvae feed on leaves, stems and bolls. After larvae have fed on the leaves, it appears as if large chunks of the leaves are missing. If the attack is severe, all of the green part of the leaf is missing and only veins are left behind.

S. litura eggs hatch after 3-5 days, then the larvae feed for 2-3 weeks. The larvae go to the soil and crop residues and grow into pupae. Larvae also feed on tobacco, okra, potato, berseem, jantar and other vegetables. They attack crops in patches and move from one field to another in large groups, which is why they are called armyworms.

S. litura is the most common in South Asia. However, its natural range extends from the Oriental and Australasian areas to parts of the Palearctic region as well. The countries with the most widespread population of S. litura include but are not limited to China, Indonesia, India, Japan, and Malaysia. 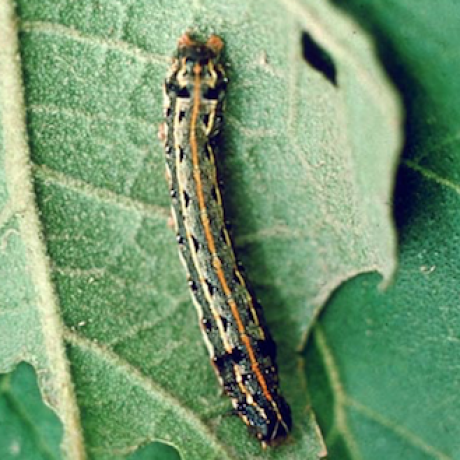