Black fly are true flies from the family Simuliidae in the order Diptera. Female Black flies feed on blood and are the scourge of many river banks. They are found almost globally, from the tropics to the Arctic tundra.

Black fly are small stocky flies, 2 to 5 mm in length, black or dark brown in colour. They are always associated with running water, in which the larvae live, filter feeding on organic matter. The adults are strong fliers and can form vast swarms becoming a major nuisance pest to humans and livestock. The female requires a blood meal before she can develop eggs, the males do not feed on blood.  After blood feeding, the female matures her eggs and lays them directly onto running water, or attaches them to vegetation in fast flowing rivers. The eggs hatch and the larvae develop through usually seven instars over a period of one to six months, before pupating in the river bed. In temperate regions the black fly adults emerge in late spring, but are present year round in tropical regions.

Female black flies feed on blood which they obtain from mammals and birds. They have short stabbing mouthparts, which they use to rupture blood capillaries in the skin. They then feed on the blood that oozes to the surface. This causes pain and irritation, and leaves a wound open to secondary infection. In some areas this nuisance can have a considerable detrimental impact on livestock productivity, prevent outdoor activities, and even cause agricultural land to be left untended. Unlike many mosquito species, black fly actively seek blood meals during the day.

In parts of Africa and Central and South America, black fly are the vectors of Onchocerciasis, or river blindness. The filarial worms that cause this disease are picked up when the black fly takes a blood meal, where it develops within the fly’s body. After a week the black fly can transmit the worm to its next host.

It has been estimated that 37 million people are infected with onchocerciasis, of which 300,000 have become blind. About 200 million people live in regions where they are at risk of infection, the vast majority of whom are in Africa.

Black fly control is mainly aimed at the larvae, through habitat modification and insecticide application. The larvae need fast running water to develop. Removing vegetation and other material from rivers minimises suitable sites for larval development, and can help manage the population. Larvicide application of BTi (Bacillus thuringiensis israelensis) has been used with success to minimise Black fly populations. Historically, programmes aimed at controlling river blindness used DDT applied to rivers to control the larvae. This was replaced with pyrethroids such as permethrin, organophosphates and carbamates. The larvicides are applied up-stream of the larval development sites and flow past the larvae, killing them. Whilst this was an effective control method, the ability of the black fly to fly significant distances, and the number of eggs a female can lay, required an ongoing programme to prevent re-establishment of the population. 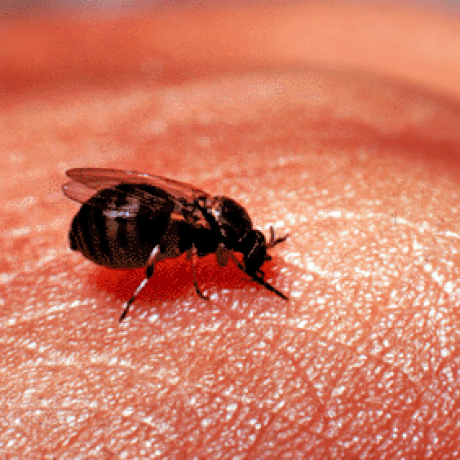