There are 700 species of sandflies and about 10 percent of these species are known to transmit diseases to people. Sandflies are found mainly in tropical locations, but some species can be found in more temperate regions of the world. Female sandflies suck blood from mammals – including humans – and transmit the disease leishmaniasis, among other illnesses. About two million new cases of the disease are diagnosed in people every year.

The female sandfly will lay 30 to 70 eggs, spreading them around several different sites. The eggs are elongated and oval. Within one to two weeks the eggs will hatch unless conditions are too cold and the eggs enter into diapause. During this hibernation-like state, the egg doesn’t grow until temperatures begin to warm.

The larvae that emerge from the eggs do not have legs and are white with a dark head. They feed on dead organic matter and are often found in cracks in walls or rocks, animal burrows, caves or in decaying leaves. Pupal development takes five to 10 days with the adult often emerging just before dawn. The male flies generally emerge about 24 hours before the females.  Only the female adult sandfly will suck blood, which she must have for egg production. Both the male and female feed on plants. Adults are less than a sixteenth of an inch long.

Leishmaniasis is among the most recognized diseases transmitted by sandflies, and it can infect people, dogs, cats, horses and livestock. In addition, sandflies can also transmit the bacterium that causes bartonellosis, Sandfly Fever Virus, Toscana virus, Chagres virus and Punta Toro virus. 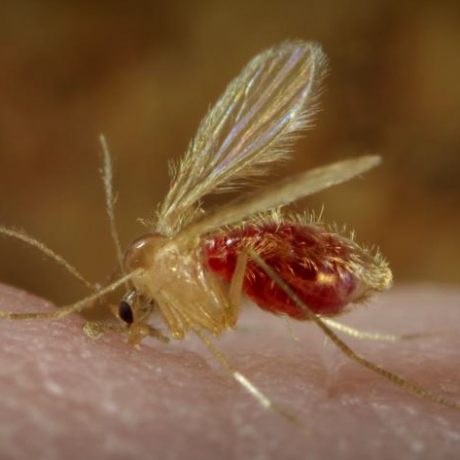