Ostrinia nubilalis is native to Europe and is one of the most important pests of corn. It is found in Europe, North America, where it was first reported in 1917, and some areas of northern Africa.

In late spring, usually a few days before the corn female inflorescences appear, the moths lay about 500-1500 eggs in masses on the underside of the leaves. Larvae take 3-4 weeks to develop and the caterpillars will either pupate, to produce a second generation of moths about three weeks later, or they will enter diapause. In both cases, they remain inside the corn plants. Overwintering caterpillars are very hardy and have often bored so far down within the plant that they are able to survive the winter in the stubble. They pupate the following spring.

The galleries and holes through the stalk reduce the plant’s mechanical stability. The stem may break, or the female ear can fall off, especially in years with heavy rain storms, causing significant economic loss.

Control of European corn borer in US field corn is done with genetically-modified corn expressing proteins derived from Bacillus thuringiensis. So far there are no clear instances of field populations that express resistance to Bt-corn to the level of causing field failures. In other regions of the world growers still rely on chemical control. 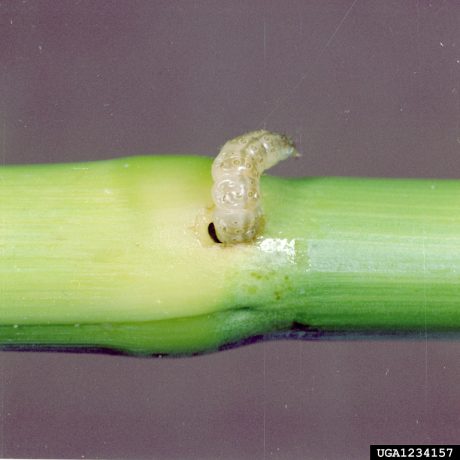