Nilaparvata lugens adults occur in macropterous (long-winged) and brachypterous (short-winged) forms. The macropterous form is about 3.5 – 4.5 mm in length. The body is brown, and the wings are transparent, with very conspicuous veins. Young nymphs are white, but they gradually become darker in older instars.

Both nymphs and adults penetrate the tissues of their rice host plants with their piercing-sucking mouthparts in order to ingest phloem-sap. Loss of nutrients and obstruction of vessels cause yellowing of leaves. Later, the plants wilt, gradually drying up and eventually dying off. In addition to the direct damage it causes, N. lugens is an important vector of rice grassy stunt virus and rice ragged stunt virus and all stages excrete honeydew, thus promoting the growth of sooty mold.

Macropterous females migrate into rice fields shortly after transplanting, laying groups of 5-15 eggs into the sheaths or midribs of leaves. The first instar nymphs hatch after 5-9 days; they molt five times during a period of 2-3 weeks. Initially, most of them develop into brachypterous adults: but as population density increases, or if food becomes scarce, the proportion developing into the macropterous form increases. During their adult lifespan of 10-30 days, macropterous females each produce about 100 eggs, brachypterous females 300 to more than 700. In the tropics, N. lugens is active all year round, and produces 3-6 generations per crop. It is not able to overwinter in temperate regions, so it migrates into these areas in the spring, often after traveling long distances. 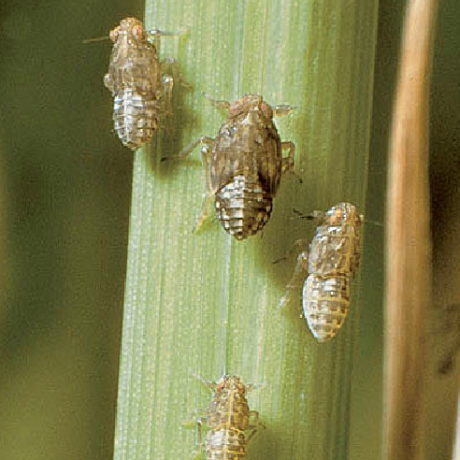