The red-leafhopper is an hemipteran species of high economic importance to sugarcane and other plants of the family Poaceae. In Brazil, the period of higher incidence extends from September to March, which coincides with higher rainfall and temperature, as well as longer photophase.

Females lay eggs on leaf shafts close to the base of the plants and also on the soil and crop remains, usually during March and April. Under low humidity conditions, the species may undergo diapause until September. Each female lays approximately 340 eggs, which are elongated and yellowish. As they mature, eggs become darker. Adult egg coloration is variable, mainly in males, and it may vary from intense red to creamy yellow. Hind wings are translucent and show longitudinal patterns. Females do not present significant variation in wing patterns, are dark brown with defined longitudinal patterns. Adults are active at dusk and remain the day sheltered in the base of leaves. Hind legs are saltatory and adults move themselves mostly salting rather than flying. Mean adult lifespan is 20 days. Nymphs are initially orange and then cream maintaining small areas with the initial coloration. They look alike adults but do not bear wings and fully developed sexual organs. Right after emergence, nymphs are active and seek for a feeding site. In sugarcane, they establish themselves in the plant collar and radicels to suck sap, producing a characteristic foam, similar to soap that covers affected plant parts. This foam results from the excretion of liquids and a mucilagenous substance produced in nymphs abdominal glands. Close to the end of the nymphal stage, foam production is ceased and it becomes dry. The insect remains protect inside the foam to undergo its last ecdisis. The nymphal stage lasts approximately 37 days.

A major damage due to Mahanarva fimbriolata is the result of the injection of toxins during adult feeding, which leads to a burnt aspect of leaves. At initial stages of damage, leaves show yellowish spots that evolve assuming a reddish color and them become opaque. Plants has is photosynthetic capacity reduced leading to a reduction in sacarose content. Stem morphology is affected and they may become fibrous and shortened. Damage due to nymphal feeding are the result of probing of vases that lead to physiological disorders. Roots are damaged which affects the transportation of water and nutrients. Xylem and phloem become dehydrated, stem may become hollow and thin and eventually wrinkle. Leaves assume an irregular shape with a palm-like appearance. Secondary shoots die, the apical meristem dominance weakens and lateral sprouts are formed in the plant.

Distribution: occurs in all sugarcane growing regions in Brazil. 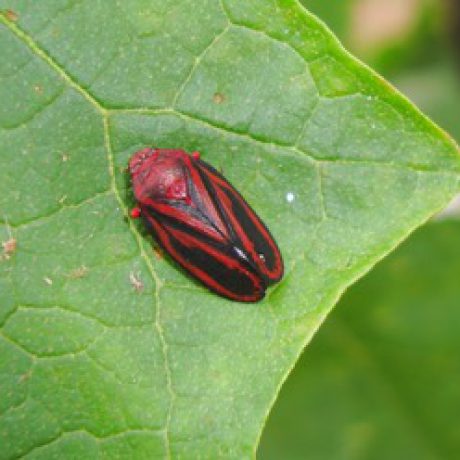