L. botrana is one of the most important pests of grapevines. They can have several generations per season, depending on local conditions such as climate, altitude or light intensity, from only two in the northern part of its range up to four around the Mediterranean, or (seldom) even five. Eggs (40-60 per female) are mostly laid singly, preferably in sun-protected places in inflorescences or in bunches of grapes, in the folds of dry leaves, under the bark or the straw mulch, or in cracks in support-stakes or under earth mounds. The larvae hatch after 4-15 days, and are initially very active, dispersing rapidly. Over a period of 3-4 weeks, they pass through five instars. In non-diapausing individuals (i.e. during the summer), the adult moth emerges 8-14 days after pupation. Towards the end of the season, mature larvae of the last generation leave the plant in search of a hibernation site, mostly under bark, in cracks of wooden support stakes or similar places. There, they build an especially strong cocoon that protects them during diapause and pupation. The first adults appear in the spring when the vines develop their first leaves. Two or three days after mating, oviposition begins.

The economic injury caused by the first generation is generally moderate, as most varieties of grapevine are able to compensate for the loss of flowers to a certain degree. Much more important is the damage to developing or ripe grapes, not least due to the secondary infections that reduce the quality of the wine produced. Table grapes become unmarketable even if only a few berries are flawed. 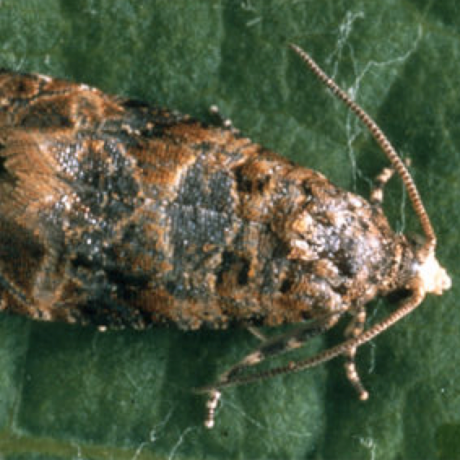