Liriomyza trifolii (Burgess) Diptera: Agromyzidae is a leafminer pest native to the New World that has been introduced into many countries in Europe, Africa, Asia and Oceania. L. trifolii has a vast host range including vegetables and ornamentals from about 50 genera in several economically important plant families. Females cause punctures for oviposition and feeding that result in a stippled appearance on foliage. However, the most important damage is the mining of leaves by larvae, which can cause leaf drop, and reduction in photosynthesis and growth in the plant.

Multiple generations can occur in tropical and subtropical environments. Each leafminer female can produce several hundred eggs during its life span and lay up to 40 of them per day. Under favorable conditions some Liriomyza species can complete their whole life cycle in a few days. Leafminers prefer high temperatures, during cool weather development rests. Adults are small (<1.7 mm body length) black and yellow flies. The scutellum is bright yellow; face, frons and third antennal segment also bright yellow. Keys for the identification of agromyzid leafminers can be found in Spencer and Steyskal (1986).

Several species of parasitoid species have proved useful at reducing populations of this pest. Yellow sticky cards also reduce adult densities. However, chemical control is commonly used to protect plant foliage from leafminer injury, and very few insecticides are compatible with parasitoids. Insecticide resistance is recognized as a major problem. 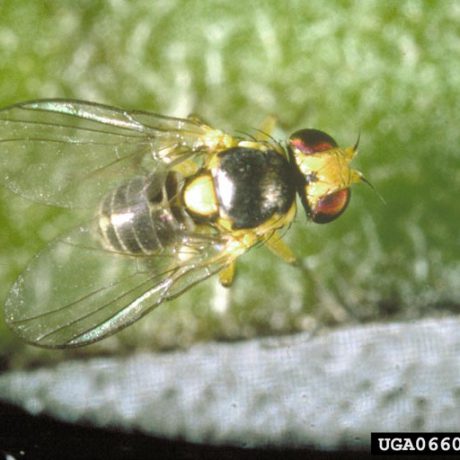