Leptinotarsa decemlineata is a common pest of solanaceae crops, especially potato, but also eggplant, tomato, pepper and tobacco. The adults appear from hibernation in May, feed on young leaves for 5-10 days, mate, and then immediately start with oviposition. Over a period of 4-5 weeks, each female lays up to ca. 1,000 eggs in clusters of 20-50 on the undersides of leaves. The larvae hatch 3-14 days later. They molt three times, and the four larval instars last 2-4 weeks. The larvae drop to the soil where they build a round cell up to 20 cm deep to pupate there. Pupation lasts a further two weeks, but the completely-developed beetles stay in the soil at least one more week before emerging. Only a few of them use their ability to fly to find new food sources. There are 1-3 generations each year. In October, the adults burrow 20-40 cm (7.87 – 15.75 inch) deep into the soil, where they overwinter. 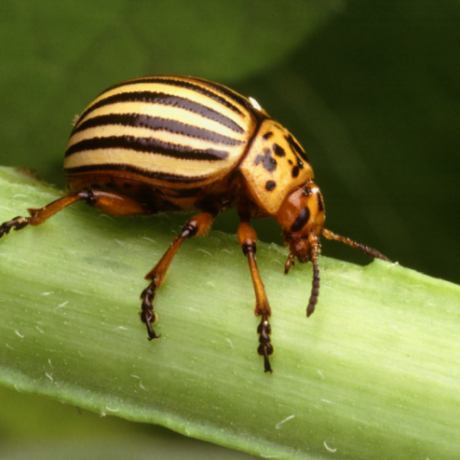