This polyphagous moth is one of the principal enemies of cotton and maize. It frequently attacks vegetable plants: tomato, cabbage or bean but also rice, wheat and soybean.

Corn earworm is found throughout the temperate and (sub)tropical parts of the Americas. It cannot overwinter successfully farther north than about 40°C (104°F); but being highly dispersive, it will immigrate into the northern USA and southern Canada each spring

Adults appear in April-May and can be observed until October. Females lay several hundred eggs (up to 3 000) on all parts of the plant, flowers and fruits included. Depending on the climate 2 to 7 generations can be observed. The life cycle is completed in about 30 days.

The most severe damage is caused by the attack on reproductive parts (flower buds and heads, berries and maize inflorescence.

Resistance to many insecticides has been reported for H. zea, in North-America and Latin America, mainly from the carbamates (MoA 1A), organo-phospates (MoA # 1B), pyrethroids (MoA # 3A) families, or to BT (Bacillus thuringiensis) compounds. Resistance was reported to a lesser extend than for H. armigera, mainly because of lesser geographic distribution compared to H. armigera. 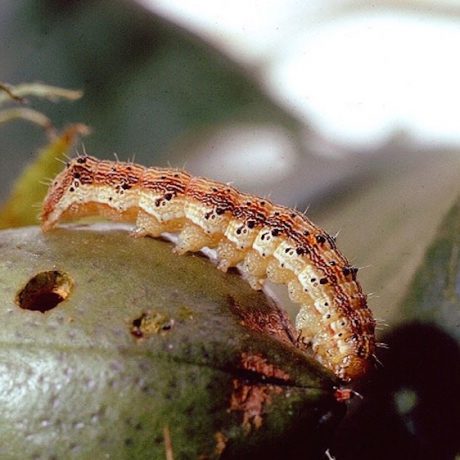