Commonly known as brown stink bug, Euschistus heros is Neotropical species, widespread in South America. Currently it is considered a major soybean pest in Brazil and its importance increased since 1970 when it was a rare species. It is better adapted to warmer climates as Brazilian central region and Northern Paraná. Besides soybean, this pest attacks beans, cotton, sunflower and several other plant species such as those from the families Fabaceae and Brassicaceae. Aside from cultivated species it may develop in weeds such as Euphorbia heterophylla and Acanthospermum hispidum. Its reproduction in weed species has not yet been documented under natural conditions, though.

Adults are dark brown with a typical spot at the end of the scutel that resembles a half moon. Another distinguishing characteristic is the presence of two horn-like lateral projections in the prothorax.

Eggs are initially yellow and become pink when close to eclosion. Upon emergence, nymphs measure approximately 1 mm and bear a yellowish color. As they develop, they become greenish or gray.

Females lay eggs on leaves, in batches of 5-7. First instars remain on eggs and undergo the first ecdisis shortly after they start feeding. From the third instar on, nymphs become more active and disperse in the habitat. At this stage their feeding activity becomes more intense leading to damage. In all, nymphs undergo seven instars. Adults lifespan extends for 4 months and may reach 10 months. The months of November to April correspond to the period of higher pest incidence in Brazil. During autumn, individuals seek for shelters under leaves and cultural remains and undergo a diapause, a period where no feeding activity is observed and that may last up to seven months. As adults hide during this period, low mortality due to parasitoid or predator attack occurs, which favors pest survivorship until the next season.

Individuals feed sucking sap on stems and pods of its host plants. During feeding, they may infect toxins on plants which affects soybean yield due the induction of abnormal leaf physiology. As they remain on the plant harvest is hampered and leading to a disease known as mad soybean. Feeding on pods leads to seed failure and yield reduction.

Control of the brown stink bug in the early 1990s was difficult due to the n0n-existence of effective insecticides. Since the 1960s, control has been being achieved through the application of organophosphates and lack of new molecules has been favoured the selection of resistant populations. 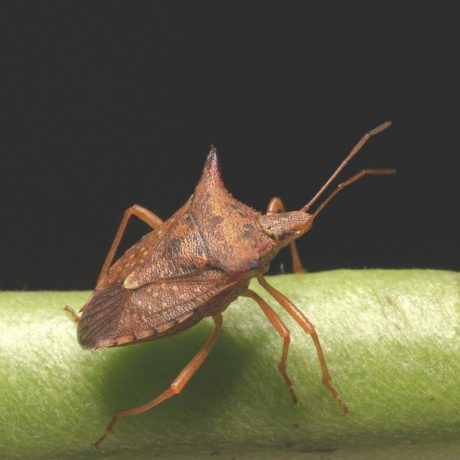