Sugarcane borer attacks plants in the family Gramineae (grasses). Though principally a pest of sugarcane, this insect also will feed on other crops such as corn, rice, sorghum, and sudangrass. Many wild or weed grasses are suitable hosts.

It is native to the Caribbean, Central America, and the warmer parts of South America south to northern Argentina.

Overwintering occurs in the larval stage, with pupation in the spring. Adults become active by April or May, and the borer population continues to cycle until autumn. Development time is highly variable, so the generations overlap considerably. There is potential for four to five generations to occur annually, but moths are abundant only in spring and autumn. During the summer a complete generation may require only 25 days.

Larvae bore into the sugarcane stalks. In mature plants the tops tend to weaken or die, sometimes breaking off. In young plants the inner whorl of leaves is killed, resulting in a condition known as “dead heart.”

Sugarcane borer could damage sweet corn in two ways. During early in the season, they may attack the whorl, feeding on the young developing tissue, resulting into a series of holes across the leaf blade. If such damage is extensive, the growing point of the plant may be killed and plant growth stunted. Later in the season the larvae descend to the stalk and burrow in. Large larvae tunnel through the stalk, causing the plant to be prone to breakage. On occasion, especially during the second generation, larvae may burrow into corn ears.

First report of resistance alleles to commercially available Cry1Ab Bt maize was published in 2007 from the US (Huang et al. 2007). Likewise, in Brazil, the resistance of the borer populations to Cry1Ab was variable with LC50 and EC50 values, reaching about 30-fold (Girón-Pérez et al. 2014). Larvae of the Cry1Ab-resistant strain are also highly resistant to Cry1Aa and Cry1Ac (Wu et al. 2009). 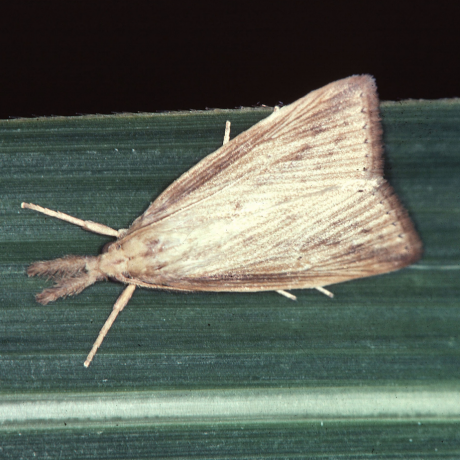