Symptoms vary, depending on the age of the plants. When young plants are attacked (which often happens while they are still in the seed bed), the first symptoms are the dying-off of growing points and the surrounding leaves (“dead heart“). In contrast, infested older plants first show yellow, dried out leaves. Their outer leaves curl, the leaf sheaths turn yellow, and finally, the leaves fall off. Heavy infestation can lead to stems being hollowed-out completely, and to the formation of empty panicles, a condition commonly called “white head”.

In most areas, C. suppressalis has two generations per year; in some northern parts of its distribution area (e.g. northern Japan), only one. However, under favorable conditions such as those in the tropics, up to six generations are possible.

The larvae overwinter in stubble and straw, and they are able to survive mild frost during their diapause. Egg deposition always occurs in the morning. The female lays its ca. 300 eggs in several batches on the undersides of leaves, usually along the main vein, and covers them with a brown secretion. After 6-10 days, the larvae hatch and start feeding on the leaf epidermis. Then they tunnel into the leaf sheaths, thus causing the leaves to yellow, and later, to die off. When the larvae reach the stem, they hollow it out one internode at a time, penetrating through successive nodes. One larva can destroy several plants.

The whole generation cycle lasts between 35 and 70 days, depending on climatic conditions. 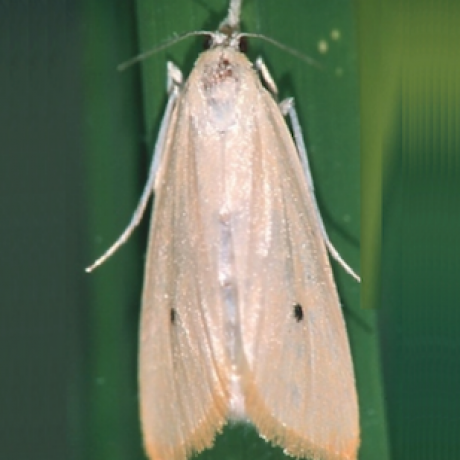