Known as Indian cotton jassid, Indian cotton leafhopper, green jassid, cotton leafhopper or okra leafhopper, this is a hemipterous pest commonly found in India and that attacks plants of at least 25 species such as potatoes, beans, sorghum, maize, cotton and okra. In cotton, yield losses may be as high as 100-114 kg of fiber per hectare and in sunflowers attack combined with whiteflies may result in losses of 9.2%.

Eggs are yellowish-white, curved and measure 0.73 x 0.24 mm. They are laid inside leaf tissues of okra epidermis. Each female produces 25-34 eggs along its lifespan. Embrionary development takes from 6 to 10 days and nymphs undergo five instars. Initially, nymphs are transparent and become yellowish-green at the end of the stage. Nymphs measure from 0.6 to 2.2 mm long and mean development time is  7 days.

Adults have dark violet eyes and green legs. Wing color varies and are yellowish green during summers and reddish-brown during winter. Two black spots in the head and two in the wings are distinctive characteristics. Adults live from 11 to 16 days, reaching up to 22 days. Females start laying eggs 2-4 days after mating and produce eggs along 4-9 days.

Nymphs and adults are usually found in the abaxial side of leaves and population peaks from June to August. Rainfall is a key mortality factor of nymphs and adults as well as temperatures lower than 29ºC , humidity higher than 78% and photophase shorter than 6.4 hours.

Adults have a short active movement capacity but are easily transported by wind and infested propagation materials.

Symptoms include chlorosis, leaf marginal rolling and ondulation, as well as necrotic areas, dropping and a growth reduction under higher pest pressure.

No natural enemies are known for this pest and cultural practices are important to prevent damage, such as observe the most favorable planting period (April-June in Northern India) and crop rotation with non host plant species

Chemical control with insecticides is an alternative to be taken with precaution as known cases of resistance have been reported in India and Pakistan. 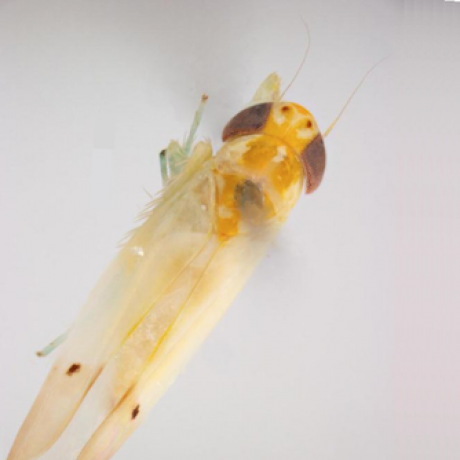